The day started at 3am for Lady CurbCrusher. She is a light sleeper anyway and with all the street noise, like the walk signals beeping all the time never shutting off, she was up early. Also the bar across the street stays open until 4am and right before they closed they kicked a man out who was loudly shouting obscenities as he walked (tottered) up the sidewalk. One of the things about Sydney that you notice walking around is that the streets are clean, and that is because the sidewalk cleaners show up early pressure cleaning the sidewalks and cleaning the light poles. Mr. CurbCrusher and Little CurbCrusher got up around 5:30 and 6:30 to start their days. We made bagels (have to smoosh them flat to go into toaster) and toast (WonderBread is also too big to fit) and had OJ and coffee.

Today we are headed out to see the Blue Mountains, about a 2 hour train ride outside of Sydney. Our goal was to be on the 8:18 am train to Katoomba. We got ready and walked the 6 blocks with all the Sydney commuters to the train station. We made it with 3 minutes to spare. An opportunity to use our Opal cards for the first time, tapping them to open the gates and then again when we got off the train.

The train had 4 cars with an upstairs seating area and downstairs area. The 1st + 4th cars were quiet cars- no cell phones and only very low noise permitted. They were very clean and ran smooth on the tracks. The trip took about 2 hours and we made about a number of stops on the way. When we arrived we tapped our Opal cards and exited the station. Then went to find the 686 bus that goes to Echo Point and Scenic World.

We found the bus stop about a block and a half from the train station and saw people wearing an ultra marathon shirt, I struck up a conversation with them. They had just done a 100k (the Ultra Trail Australia) over the weekend here in the Blue Mountain National Park. The three of them had finished in 18, 21, and 24 hours. The bus came and we got on and rode to Echo Point. We got off there and took pictures of the Three Sisters rock formations and the mountains. They call them the Blue Mountains because of the eucalyptus trees growing there and the shade of blue they give off. The area did smell of eucalyptus from the leaves.

We then went inside the visitors center and talked with a volunteer named Helen who suggested that we should do the walk down to Three Sisters, and then continue down the Giant Stairway, then follow the trail to Scenic World. At Scenic World we would have a choice of riding the inclined railway or the cable car to the top again. CurbCrusher and Little CC bought souvenirs then we were off.

The path from Echo Point to the Three Sisters was nice, wide and paved until you get to the last lookout and then it became very narrow and steep with lots of metal ladders and rock steps that were worn away. After about 5 switchbacks we came to the Three Sisters area and took our pictures on a bench there. This path was also marked from the race that weekend. We then started to descend the Giant Stairway which consists of over 900 steps. All of them very steep, very narrow, and tight. There is 2 way traffic on all of the path, but we only passed about three people climbing the stairs. There were great views of the valley and the mountains.

The going was hard on the knees and feet, and the steps seemed never ending. In some areas the dirt had worn away so it was difficult to navigate the steps. The walk/trek was gorgeous though and the weather was great for it. Not too hot, but slightly chilly under the forest canopy. After about an hour we came to Federal Pass and then Great Round Walk which was a path worn into the forest on the mountain. No more metal steps, just rocks and dirt. Eventually we came to Katoomba Falls crossing and saw part of the waterfall. We stopped and took pictures here and finally saw other people. Up until then we had only encountered about 5 people going towards Three Sisters all morning. We were very close to Scenic World, and started running into other tourist, and folks that had just ridden the cable car or tram to the bottom of the valley. In total, the walk took about 1.5 hours at a leisurely pace. As we entered the Scenic World boardwalks, we arrived at the incline Railway station where lots of tourists were. We continued around the boardwalk to the cable car, and read the various interpretive signs about how the area was mined for coal. When we arrived at the cable car, we jumped on and were whisked up the mountain in less than 2 minutes it seemed. Then we had to pay for the ride before they would let us exit. I think it was AU$ 16 per person, as opposed to the full access ticket for Scenic World which is AU$35 per person. It certainly beat walking up the steps at Scenic World.

We decided to eat something here and try to catch the 2:18 pm train back. Lady and Little CurbCrusher split a hamburger (Angus), while I had fish n chips and we ate watching the trams come and go. We finished and went outside to wait for the bus to the train. There was a really cool steam clock at the entrance of Scenic World that released steam every 10 minutes and inside the mechanism coal cars went up and down. The bus soon came and we got a short tour of the town on the ride back. We had missed the 2:18 pm train so we had to wait for the 3:18 pm one.

While waiting for the train, we went on a hunt for watercolors for our gallery wall. Most shops said try the conservatory so we walked there. They didn’t have any either but I found a postcard to purchase for his office. On the walk back we admired the Fall colors in the trees on the grounds of a local hotel. Then we tapped into the station and waited for the train. The train came and we got on for the 2 hr ride home. This time we got on the quiet train car as our morning experience on the normal car had a young couple behind us being overly loud and affectionate for about half the trip. It was a smooth ride home to Sydney central.

Little CurbCrusher wanted to try a foreign McDonald’s so we walked over to Park St to find one. Compared to the McDonalds at home, it was large, a 2 story space with automated ordering kiosk and lots of tables. After eating, we all agreed that there was a reason that it had been 3 years since we’d been to a McDonalds, and we didn’t need to return. 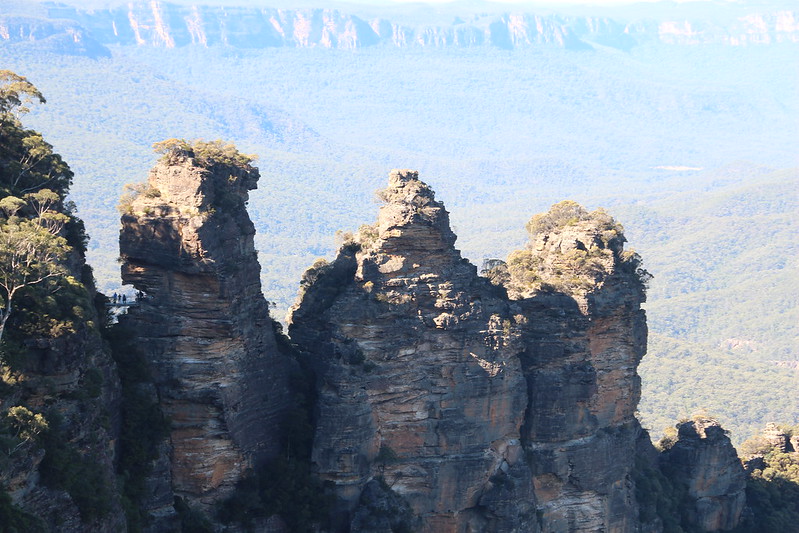