Today started with Australian birthday cards for Lady CurbCrusher. The Plan for today is to catch a ferry and go to Sydney Zoo and hang out with a Koala for a while. Then back for a nap, and off to a sunset cruise and dinner in Sydney harbor for the birthday dinner.

Once again, we walk through the Botanical Garden to the Circular Quay, to catch the 9:20 am ferry to Taronga where the zoo is. They sell zoo ticket at the wharf at Circular Quay, but they do not take the coupons that we’d picked up in one of the tourist papers, so we decided to wait until we get to the zoo.

The Taronga Sydney Zoo is situated on a hill (Actually being from Florida, I’d call it a small mountain). When you get off the ferry you are at the bottom of the hill and there are three ways to the top. One is to walk, the second is to take the cable car to the top and the third is to ride a bus. Options one and two require that you have a zoo ticket. We really wanted option 2, the cable car, and thought it would not be a problem as we could just buy a ticket at he zoo ticket office and ride it up the hill. However, this was the middle of the week and the bottom of the hill zoo ticket office was closed. That left the bus.

So we took the bus to the top of the hill. Got in line to buy tickets and get a map. Since the ticket office does not sell the Koala experience, we headed over to the souvenir shop purchased a time slot for the Koala Encounter at 11:15 am for AU$25. The Koala Encounter ticket is good for up to four people, and you get a photo taken by the zoo photographer, get to talk to their keepers about the koalas and spend five – seven minutes in the Koala enclosure taking your own photos and basking in the presence of the Koalas.

So with that taken care of we started up the trail to the Australian Native Species area. First we came to Australian Nightlife animals. We weren’t able to get any pictures in here because it was so dark and no flash was allowed. Then we came to the platypus area but it was sleeping upstairs. We saw a wombat next.

Then we continued on to see the Echidna and then into a fenced enclosure where the wallabies, emus, and kangaroos were roaming around. You had to stay on the path but there were no fences between you and animals so if they wanted to come near you they could. I thought that was kind of cool.

We had spent enough time looking that it was time for our koala encounter so we headed to the by then and we were led to an area away from the public. Left our bags but could take our phones and cameras. There were 2 female koalas Sydney who we had our pictures next to was resting and Ruby who was actually very active. She was scratching and jumping around. Unusual because they sleep 20 out of 24 hrs a day. After asking lots of questions and taking many pictures we left the area to get our official photo.

We then we moved on to see a tree Kangaroo and a quokka and a red kangaroo. Next was the Tasmanian Devil which looked like a big black rodent. It was really quick and didn’t stand still too long. We walked through the kids area which had farm animals to pet as well as more kangaroos, emus, quokkas, and a wombat burrow. 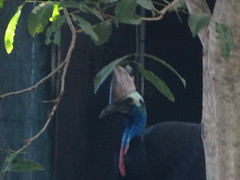 We stopped to eat a snack and then moved on to see the Male elephant (kept separate from females) and the very hard to find cassowary (I didn’t see it until the pictures were loaded onto the computer) and then the lemurs. We were too late to see the lemurs up close with a keeper since they went on a 2 hr lunch break but got a few photos from above. We then went to the Food Market and shared a sandwich and rested. There are a lot of hills in the zoo and it overlooks Sydney Harbor giving it great views.

After lunch we walked over to see the rest of the elephants. Lots of school kids were here today to do a field trip. All of them wear uniforms. They are loud but tolerable. After looking at the elephants we walked on to see the sun bear. It looked kind of lonely all by itself. Then the tortoise who could live up to 150 years. Then the condors. They have a huge wing spread. Then off to see the otters. We first only saw one but it must have told the other it needed to perform because soon there were 2 chasing, wrestling, and swimming together. Lady CurbCrusher could have watch them all day. Such energy they have. There was a pygmy hippo next. It was so cute. Then a fishing cat which looks like a larger lynx, then last we saw the red pandas. There were many more animals we could have seen but it was almost 2 and we wanted to get the ferry back to Sydney.

It was a fun relaxing day but we actually put more steps in at the zoo than descending and walking the Three Sisters trail the day before. We caught the ferry just before it pulled out and had a quick trip back to Sydney. We got off the ferry and went to Starbucks to collect Lady CC’s birthday drink but they wouldn’t honor it here (Little CC later emailed them and they will give her a birthday drink when she returns to the US). We walked home and rested for about an hour and a half before walking back down to Darling Harbor to catch the Captain Cook sunset cruise for the birthday dinner. 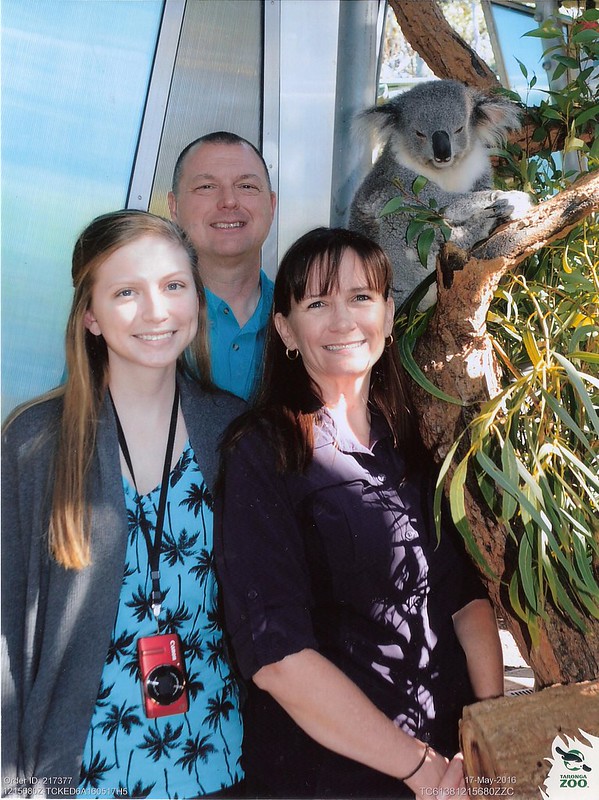 We boarded at 4:50 pm and left around 5:10 pm. Didn’t see too much of a sunset because it was mostly done by 5:00pm that night. The boat was large but not full, it had 2 floors for dining. We booked a window so had some great views as we sailed. Got a few good photos of the last of sunset before it got too dark. We had an enjoyable meal of salad, spinach stuffed chicken breast and cheesecake. Sparkling wine and white wine with dinner. Since she just turned 18, it was Little CC’s first legal serving of alcohol since the drinking age is 18 here. Mr. CurbCrusher and Little CC had a salmon and caviar salad. Little CC had the ravioli for dinner and CurbCrusher had chocolate and orange flourless cake for dessert. After eating we headed outside to get night pictures of the opera house, bridge, and city. We got back to the dock about 6:30 pm and started walking home. Before going home we stopped at St Mary’s Catholic Church to see the inside. It was so beautiful lots of stained glass windows. Beautiful ceilings and the organist was playing at the time. There was a tour of the vaults but we didn’t have enough time to go through them. When we came out there was what appeared to be a bride having photos done. We think it was a professional photo shoot since there were 2 brides. Beautiful backdrop.