Today is Rangitoto [the youngest of the volcanic islands that are found in the bay at Auckland. It is an uninhabited national and can only be reached by ferry] Day. We need to make the 9:10 am ferry so we have as much time as possible on the island before having to catch the return ferry at 3:15pm which is the last one of the day. We got ready and then left the apartment and stopped at Ronnie’s Bakery for some ham and cheese croissant sandwiches. There is nothing available on the island because it is a national sanctuary.

We had to brush our shoes off before going on the ferry because of the pests we might bring to the island. Our ferry today was ½ the size of the one to Waiheke Island and Victoria from Germany joined us on the trip over. We stopped in Devonport again and landed at 9:45am.

The island is mostly lava bed so everywhere you look there is black lava rocks. The paths up to the summit consisted of nothing but lava rocks. We got off the ferry and walked by a natural swimming pool that fills with seawater, next to it was an arch left when it was a prison camp for men.

We started up the path with a lot of volunteers who I think were going to the neighboring island of Motutapu to do some work. The path became pretty steep fast and by halfway up Eaglet and I shed our fleeces and then our rain jackets. CurbCrusher took off his rain jacket. The high temperature today was only 60F with intermittent rains all day.

We finally got to an area that has lava caves and we saw 3 or 4 and walked the loop around them. We shined our flashlights into them but didn’t find the ones Eaglet saw online that you could stand up in. Most look collapsed to me. Coming down from the tubes on a really rocky slippery path it started to rain. So we had to scramble and get covered again.

We had hiked about 40 minutes so far and the tubes were another 20 minutes of walking around and we still had to walk another steep path to the summit boardwalk for another 20 minutes. At least the path became wider and less rocky. We came to stairs that led to a viewpoint area that if it wasn’t raining would have been an awesome view of Auckland.

We then waked the Crater Rim Track for 15 minutes which hooked up to the boardwalk stairs that led to the Summit Road (a million stairs it seemed) [At the bottom of the stairs we ran into Victoria, who was the first person we’d seen since the summit. She was walking the same loop we were in the opposite direction]. The views were gorgeous once the rain cleared up. But the wind became fierce. We walked along the Park Rd which was nice and wide and mostly level for about 45 minutes until we reached Mackenzie Bay and the Beacon Lighthouse. It was a cute short Lighthouse with red and white stripes.

We decided to make use of the toilets located here and to eat on the beach. So we sat on a huge piece of driftwood log and ate lunch while admiring the view, it was sunny but the wind was cold. After we finished we started walking back toward the wharf on the road.

Rangitoto Island is supposed to be known for birds but there really weren’t a lot today, maybe because winter’s coming. They had lots of traps set to catch predators that eat the birds with an egg in each trap.

The walk through the mangrove are took about 1 hour and 15 minutes. We crossed a causeway and noticed there were no fish in the pools either. So not a lot happening on Rangitoto Island today. [It was about here that we ran into a family of four that had been on the morning ferry walking in the opposite direction from us. To give an ideal of how deserted this island is, they were the first people we’d seen in the 2+ hours since we’d run into Victoria at the bottom of the Summit Stairs.]

Getting closer to the wharves there were several Baches (beach houses) or signs for them. Most of them were built in 1906 or so and lots of them were knocked down by people in 1978-82. There were only a few left standing. One is a museum open on Saturdays during the warmer season. [It seems while Rangitoto was never really officially occupied by people, in the early 1900’s camping permits were issued for a shilling a year. Some folks built some rather permanent camping facilities (the Bachs) and a community starting growing up there following WWII. In the 50’s the government made an attempt to clear the island of residents, but gave life deeds for some Bachs. People transferred the titles to their children in order to keep the Bach private longer. Hence there are still a few Bachs left on the island.]

We ended up back at the wharf area and waited for the return ferry. We ended earlier so we are taking the 2:15pm ferry back.

When it arrived it was about the size of the snorkel boat in Cairns. The captain gave us a running commentary [Actually, the 2:15 ferry from Rangitoto to Auckland is also the 1:30 harbor cruise, so you are basically joining the harbor cruise in the middle.]the entire way back which included a closeup view of the Bean Rock Lighthouse and the new commercial harbor they are building. Also, we were able to see a close up of Queen’s wharf where the cruise ships dock (next to a large white caterpillar awning). We then walked back to the apartment and rested for a while until dinner. We had walked over 10 miles on the island today according to our phones and CurbCrusher’s Garmin. 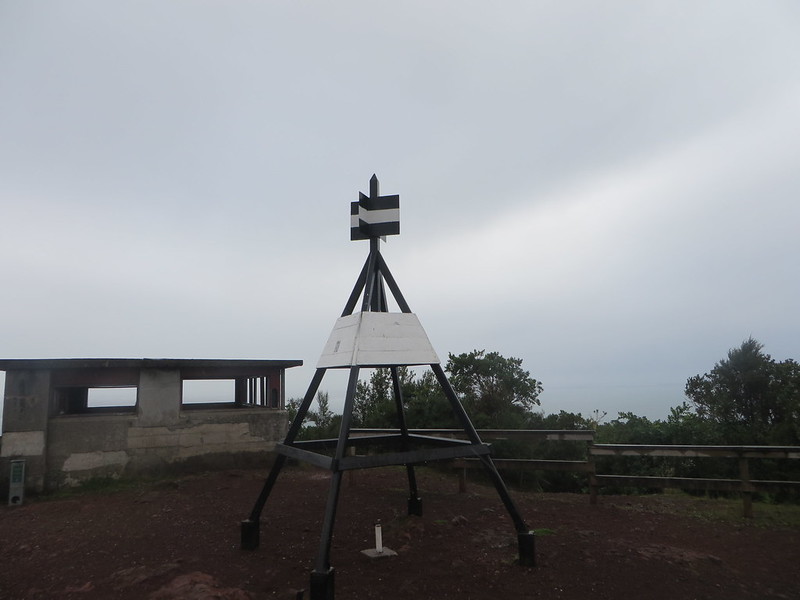