About 30 hours before this photo was taken on May 14th, the CurbCrusher gang left our beloved beagle, Dixie in Orlando to await her dog/house sitter. One of the fantastic CurbCrusher neighbors, gave us a ride to the airport, and we began our journey to the Southern Hemisphere and another continent in the evening of May 12th.

We began the journey on United Airlines to Houston and then in the words of Lady CC “had to walk forever to Terminal D for Air New Zealand flight.” It was just the begining of the walking we’d do over the next two weeks. We checked in and boarded. It was a nice aircraft, a Boeing 777, we were back in economy. Good seat back entertainment lots of movies, music, and TV shows. 14+ hours of flight time. And apparently Air New Zealand has not gotten the memo about not serving food, because there was a decent dinner and breakfast served during the flight. We arrived in Auckland early in the morning (it was now May 14th around 5:30am) and parked at a hard stand and took a bus to terminal.

Once in the Terminal, we headed for the international transfer lounge, and had to pass through security again. We then boarded (A320) another Air New Zealand flight, exhausted, but with still 3 hrs of flying left. The seat back entertainment still good as was the crew, and Air New Zealand fed us again. Finally we arrived in Sydney, Australia around 8:30am on the 14th of May. Immigration and customs were fairly easy to get through. With a US passport, we were able to use the automated kiosk and photo taking line for immigration, and with nothing to declare we walked right through customs and bio-security. We then got some Australian Dollars at an ATM and got in the taxi line for a ride toward our lodgings.

For the first time ever, we used Airbnb. We selected an apartment located in the Wolloomooloo section of Sydney right next to Hyde Park and the Australia Museum the on corner of William + College Street. Our host, Michael showed us around, how to get in and out of the building, and filled us in on some local attractions and activities and left. We then took showers and rested until a bit after noon. 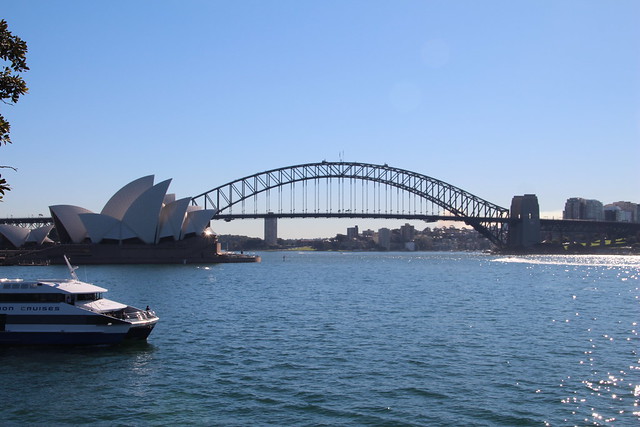 After finding lunch in an Italian café on nearby Stanley Street, we walked through Hyde Park to Mrs. MacQuerries chair (a stone carving) and the Botanical Gardens. From there we walked to the opera house and got our tour tickets for the next day that we had been unable to print before leaving Orlando. We bought a Christmas ornament and pen+ink drawing of the opera house. We walked around outside Opera House and then through Circular Quay toward the Harbor Bridge. We were in search of the Sydney Bridge Climb offices and so that we would know where to head the next morning. During the walk we took lots of pictures of the opera house and Bridge.

For the most part it was a comfortable day, it got warmer (75F) in the afternoon. We eventually bought drinks and walked back through Botanical Gardens to our Airbnb.

Everyone was hungry, but tired so we headed our early in search of dinner. We found another Italian Restaurant named Trovata (very good food!) just down Stanley from our lunch location to have dinner. We ate early (5pm) for here but we were so tired.

We then went in search of the Woolworth that Michael had told us about. We walked a couple of blocks past were he’d said, but did not see a Wooolworth’s sine. Finally saw a shop titled “Metro” and went in there. It appears that Woolworth is re-branding it’s city center grocery stores. So we went grocery shopping, headed back to the apartment and went to bed. 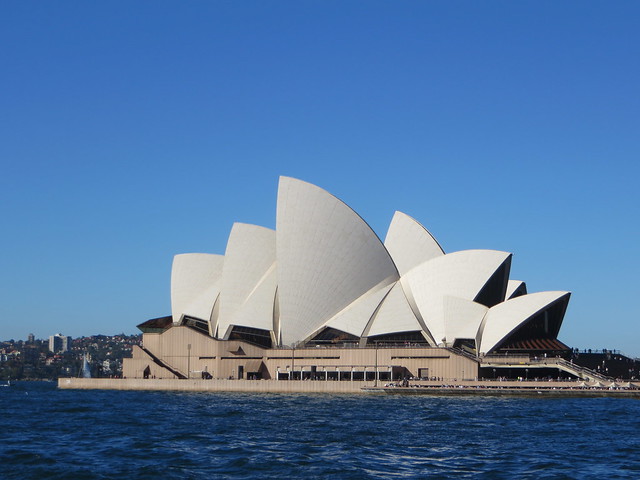