Early to rise this morning, as we adjust to the 14 hour time difference. Start making breakfast, and discover some of the differences in appliances in Sydney. The bagel was too fat for the toaster so Lady CC burned it and had to pry it out. So, from now on we will be squishing the bagel before putting it into the toaster. Also the standard bread size is a big square, but the toaster is more typical of what we have at home, so toasting bread is a two step process since part of it sticks out the top of the toaster. Finally, there is no drip coffee maker here, we have to Google the instructions on how to use a a French press coffeepot and Lady CC found her coffee way to strong, so that’s a skill she’ll have to work on. So we all had some breakfast and watched some TV morning news.

While sitting around we hear what sounds like a loud speaker, and there is a lot of people walking around on the street before the sun rises. Since this is Sunday morning, this seems odd. After going out on the balcony and listening to the goings on in Hyde Park, it becomes apparent that this is the morning of the Sydney Half Marathon. Mr. CurbCrusher is crushed. This would have been easily doable, and a great story, running a half marathon in Sydney. But we listen and watch all the commotion in the park as everyone starts.

Time to head out for the Sydney Harbor Bridge Climb. Instead of cutting through the Botanical Garden, this time we headed down the city streets to get there. As we do we pass a number of the runners that have their half marathon medals and are enjoying the post race festivities. As we head up George Street toward the Circular Quay, we encounter a very disturbed person. It is a man that is just walking up to people (mostly women) and yelling and cursing about how awful they are treating him. It seems very random, as we see him approach about dozen different people during our walk down the street. He finally takes a turn to the west after a block or two.

We arrived at the Sydney Bridge Climb and checked in and waited. There are a number of tour options, and we had selected the “Sampler” tour that only climbs halfway up the bridge and last for 2 hours as opposed to the 4 hour trip to the top. So we sat and watched a video of how to dress and harness up until our group was called.

There were 11 people in our group. All Americans except 1 Japanese family of 3. Ages from 60ish-7yo. Our guide’s name was Alex and he has climbed about 250 times. We had to sign waivers, surrender all our phones, cameras and anything else that we might could drop off the bridge and put on the fashionable blue/gray jumpsuits, hats, croakies for sunglasses, and a handkerchief. Once dressed we moved to the harnessing station, where we got into a safety harness that would then tie into the safety lines while we climbed the bridge. We lined up, hooked into the bridge safety lines and started the walk. 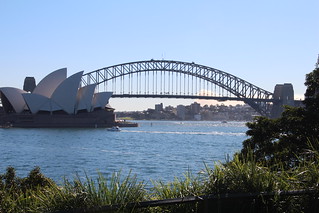 We started by going past the bridge pylons, one of which we would visit later as it has a viewing platform and a museum in it. The pylons do not offer any support, but are purely ornamental and are faced with granite. We then climbed a section nearest to Opera House. We could see cannons and wharf and water under us. As we climbed the bridge, you could see that there are 7 lanes of traffic 1 pedestrian crossing each side, bus lanes and two train tacks. About half way through the tour, we had some trouble with a gate and a maintenance person had to help Alex out. The weather was great- not too hot or cold or windy. Sun was out but it was cloudy. We stopped at a midway point and Alex took our group and individual shots. As we climbed down the other side of the bridge, we stopped near the train tracks and 2 trains going opposite directions passed while we were on the stairs between the tracks. The view from the bridge was was awesome. We could see the MacQuarrie Lighthouse in the distance. Lots of boats and ferries going by.

As we climbed, Alex filled us in on some of the history associated with the bridge:

We finished our Bridge climb tour and disrobed and collected our climb pictures. We then had drinks and ate our snack we brought. We watched the 2 movies about the bridge construction and the bridge’s role in Sydney’s success and walked around exhibit.

We then walked up street to get to the overpass that leads to the pedestrian bridge for access to the Bridge Pylon. As you climb the stairs in the Pylon, there are a number of exhibits, and a floor that operates as a small museum. At the top of the Pylon there is a viewing deck where we were able to go outside and take pictures. 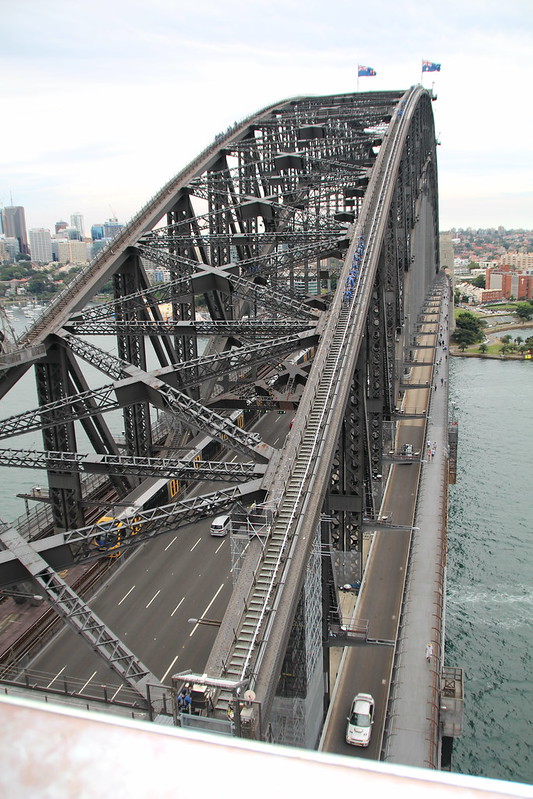 By now it was well after lunchtime, so we went looking for a late lunch. We went to a small cafe that served Australian meat pies. We took a table in back but it was hot and the servers were slow and we had to still get to the Opera House by 3:30pm. So we got up went back out to the front display cases and ordered to go. Turned out that take out was about 1/3rd the cost of sitting in the back and being served. We made a picnic of it by the Modern Museum of Art on the Quay.

Since Lady CurbCrusher was going to celebrate a birthday the next day, we went in search of a sunset dinner cruise. The reason for searching in this area is that where there are a ton of booking offices all around the Circular Quay. We were able to book one for Captain Cooks out of Darlington Harbor. We then stopped by a convenience store and got our Opal cards. These are the tap on/off cards that you can use with the public transit in Sydney and then wandered over to Opera House and took some pictures. 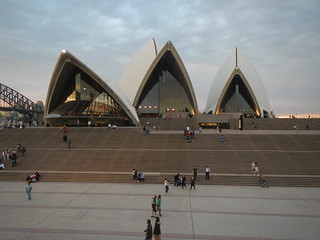 Backpacks are not allowed on the Opera House tour, so we checked our backpack and used the toilets and waited for the tour. Our tour started with Opera House tour staff taking a photo of us in front of a green screen. This was then used to make the souvenir photo book that they try and sell you at the end of the tour. We were issued headsets, as everyone wears them so that the guides don’t have to yell, and met Kenny our guide.

We started by going into the Drama Theatre (no pictures allowed) where they were staging the Noel Coward play Hay Fever. The theater had great sight lines, very deep stage and comfortable but weird looking chairs. We then watched a movie of how the Opera House was built out in the lobby. We then went into a very intimate feeling’in the round’ theater called the Studio. It used to be the elevators for scenery but was flooded in late 80’s and remodeled into a small theater. Then we went into a large theater where they do opera+ballet. Very large, with awesome acoustics. You could see the baffling of the ceiling that matched the sails outside. Then we walked outside to large doors where they used bring in equipment/sets and props. They have since built a new tunnel to get there. We walked into a lobby area that had red carpet and great views of bridge+harbor. Watched another movie then moved into a theater. After the tour we walked into a hall and were released into the main lobby to get our pictures, see the gift shop or purchase tickets to a performance. Little CurbCrusher bought some key chains for friends.

We then walked back to the apartment, regrouped and headed out for dinner. We walked (and walked) to find dinner. We ended up on Oxford street at a Mexican fast food place. Had tacos and then walked some very dark iffy looking streets home. Took showers and watched TV and slept again. 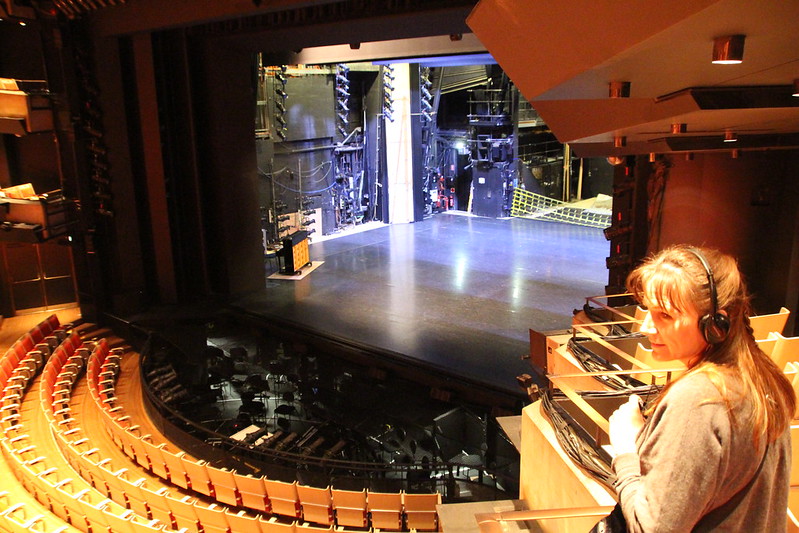