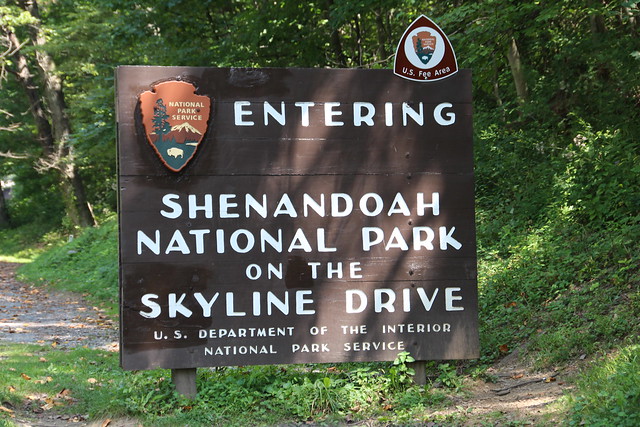 Today after a great breakfast at the hotel, CC had his meeting and I caught up on some reading while waiting for him to come back. We checked out (they gave us more cookies), and started our journey to Skyline Dr. Since I hadn’t seen any wineries yesterday that we could stop at I made my mission today to find some. So when we were almost to Skyline I found King Family Vineyards. We stopped there and admired the property. It had beautiful rolling hills, horses, and a large polo field with barns. There was a large building for the winery works and a tasting room. We went in for the tasting which cost $10.00 for 6 wines. The inside was just as pretty as the outside. CC doesn’t drink so he took lots of pictures while I was occupied. I was placed in a group that had shown up before us. We ended up with a very talkative employee. Wished I was in the group that showed up after us as their employee was a faster pourer. That group was on a drinking tour though so they wanted to get in as much as possible in one day. I didn’t buy any of their wines as they were all too dry for my taste.

We then drove a little further down the road until we came to Valley Road Vineyards. They had just opened their tasting room the weekend before. All their wines were actually coming from King Family where we had just stopped. Their tasting was $6 for 5 wines. They did taste different, a little milder, but I still didn’t buy any. They also had a beautiful piece of property.

Now it’s on to the big event: driving the Skyline. We entered at the 105 mile marker at Rockfish Gap in the South. Today is actually the National Parks 100th birthday so there is free entry this weekend. Normally it would be $10 car. I got my stamp for my book, also a Jr Ranger book for the drive and our map. We started off by stopping at each overlook but soon had to pass some by as we would never finish the drive in one day if we didn’t. The views were very scenic with the blue haze and lots of mountains. At least to Floridians they are mountains. I know people in the West would argue about that. We passed a place called Beagle Gap and I texted the sign to Miss CC. Since we own a beagle I thought it was funny. We traveled on until we reached Loft Mountain.

The bugs in VA and NC have been annoying. As soon as you exit your vehicle they land on you. I always thought Florida had bugs but not like these. You couldn’t even talk without them trying to get into your mouth. At Loft Mountain there is a camp store, campground and an ampitheater. Also hiking/nature trails. We stopped at the overlook and I took a picture of CC walking the width of the Appalachian Trail like he did in GA. He has a shirt at home that has this saying as well. There were lots of farms and butterflies and flowers to see. I guess it’s their last bloom before Fall comes.

Our next stop was at Lewis Mountain Lodge. It has a campground, cabins and a small store with picnic area. It’s a stop on the Appalachian Trail as well. The cabins looked pretty rustic.

Next stop was Big Meadows, one of the two Visitor’s Centers on the Skyline. Here we walked through the exhibits and worked on the Jr Ranger book. I was able to get another stamp here too. I think this was the only place on the Skyline to get gas without getting off the road as well.

Then on to Skyland where you could rent a room in their hotel for $174 a night. Most don’t have AC in them. They are doing a lot of remodeling work here as well.

Then on to Mary’s Rock Tunnel which was 600 ft long through granite. It took 3 months of blasting and carrying the rock away to get through to the other side. From the outside it looks like the rock will fall on you as you enter the tunnel.

Last stop was Dickey Ridge Visitor Center. We were trying so hard to make it before they closed. We ended up pulling in at 10 minutes until 5 pm. So I was able to get my stamp here. Unfortunately because of the times we stopped I never did get to view a nature talk by a ranger. The ranger here signed off for me anyway. CC was able to get some incredible views of the valley from the top of the ridge while sunset was starting to happen. We saw a deer jump over the road here.

After we left we drove on to I-66 then to I-81 looking for a place to spend the night. We ended up in Woodstock, VA at a Hampton Inn. We ate at a Denny’s then spent some time in the hot tub and turned in as it had been a long day, with lots of turning and twisty roads to drive.